In the role of Director of Operations, he was responsible for the State Emergency Operations Center (SEOC) as well as the Maryland Joint Operations Center (MJOC) and the Regional Liaison Officer Program.  During his tenure he revised the SEOC operations to more closely reflect the Incident Command System (ICS) and the National Incident Management System ( NIMS).

In 2012 he oversaw a total renovation of the SEOC utilizing grant funding, thereby providing state of the art technology and procedures to include a new layout of the physical space and training of all state SEOC personnel. He oversaw the coordination of  local, state and federal agencies with disaster planning and operations as well as special event planning and implementation, working as the conduit between state and federal government and local jurisdictions.

He worked closely with the Governor and his staff during disaster training, preparations and operations and commanded the state’s response to many high profile incidents such as Hurricane Sandy, among others.

In a 30 year career, notable among the many positions held, he was the Chief of Training and Commander of the department’s Special Operations Command (SOC).

In 2004 he was tasked with creating a Type 1 regional urban search and rescue (US&R) task force utilizing homeland security grant funds. Working with regional partners and political leaders he put together a team of 150 specialists and outfitted them with state of the art rescue, haz mat and medical equipment. Additionally, with his team, he provided high level training and exercises to ensure that all members were trained and prepared for the task.

The hand-picked team consisted of rescue and haz mat specialists, paramedics, structural engineers, doctors and an incident management team. In the aftermath of Hurricane Katrina he led the task force to Gretna and St. Bernard’s Parish, Louisiana where they conducted search and rescue as well as incident management operations.

Concurrent with his work on the US&R task force he created the department’s Special Operations Command (SOC). The command would bring together specialized units that heretofore had been spread throughout the department’s command structure and bring them together under one command “umbrella.” The SOC components consisted of technical rescue, hazardous materials teams and marine operations. Working with a hand-selected team he provided training and cross training, response parameters and a command structure that would be utilized on a variety of complex, multi-faceted emergency operations. He worked with all city agencies and the office of emergency management to ensure uniformity across all disciplines and agencies. His work as the chief of SOC also entailed special event planning and operations covering presidential visits to the Preakness and everything in between.

In 2007, Chief Brocato was asked to take over the position of Director of Training after a tragic training accident that took the life of a young recruit. He was responsible for determining what problems led to the accident as well as reviewing all department training standards, correcting the problems he uncovered and implement the necessary changes to ensure safe, effective and high quality training.

Chief Brocato put together a team of highly respected instructors who reviewed the status of the current recruit class, and under his leadership, implemented state and federal training standards. Consequently he and his team improved recruit and department training, implemented new training programs and guidelines and instituted fair and equitable disciplinary procedures. He and his team oversaw testing and selection of recruits raising standards to ensure that those selected were mentally and physically prepared for the rigors of the fire service. Additionally, working with political and labor leaders, he replaced the Firefighter Paramedic (FPA) Program with one that was more streamlined, provided more and better training and reduced administrative hurdles to recruit success.

Throughout his 35 year career Joseph Brocato has been at the forefront of public safety, emergency management and homeland security planning and operations. He has set the standard both at the local and state levels for operational planning and implementation. He has provided strong leadership during crisis situations and emergency operations as well as providing the vision to move the public and private sector forward towards being more prepared, more resilient, and functionally ready. 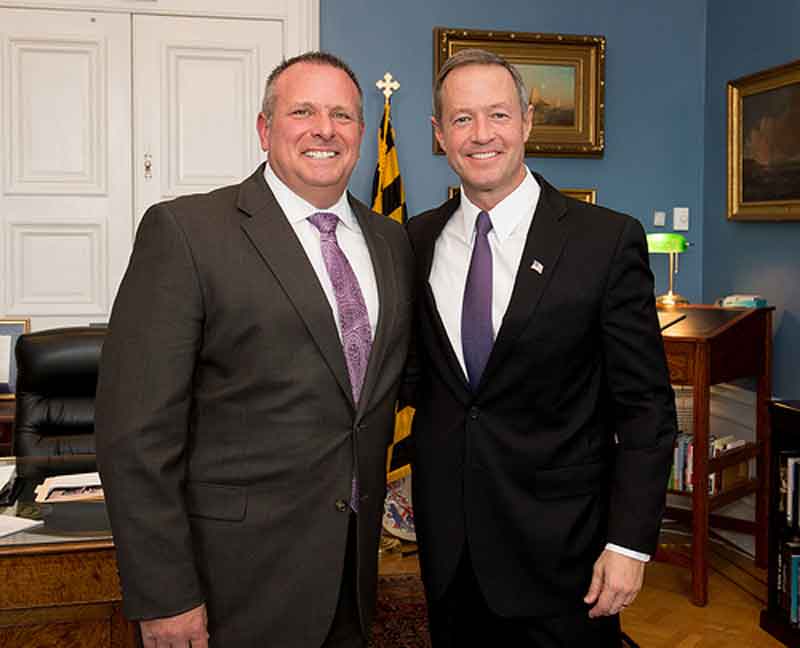 Maryland Governor Martin O’Malley meets with Joseph Brocato to congratulate him on his retirement from public service.

In his role as field officer. Lieutenant Yant was involved in numerous high profile and complex emergency operations. During this time he responded to everything from medical emergencies to single dwelling fires as well as multiple alarms and extraordinary incidents such as high rise fires. Lieutenant Yant has a strong working knowledge of emergency operations, crisis management and planning that was learned from the ground up. He has been interviewed by trade publications such as Firehouse Magazine for his heroism as well as planning operations.

In 2002, Lieutenant Yant was tapped to be a consultant for a major motion picture about Baltimore firefighters, being filmed in Baltimore. He was the department coordinator and technical advisor for this major 120 million dollar project from the project’s beginning to it’s completion. He coordinated and participated in providing realistic training to the actors as well as working with over 300 firefighters hired as movie extras. His goal was to ensure authenticity and safety amongst all cast and crew members working on the production. Through his leadership and organizational skills, Lieutenant Yant was instrumental in bringing together all the disparate groups and organizations from Hollywood executives to politicians, labor leaders and cast members as well as fellow firefighters. He was able to provide expertise, resolve conflicts, oversee safety and ensure a safe and successful mission. The movie project, known as Ladder 49, was a complete success and was completed on time and without serious injuries. Again, his exploits would be featured in a Firehouse Magazine article in October of 2004 which detailed the complex role he played in bringing the movie to fruition.

In 2005 he was promoted to Executive Officer (XO) for headquarters where he was tasked with numerous high profile projects. In this role he managed a number of front burner issues such as an overcharging and consequent overpayment by the city to a vendor in the amount of close to 1 million dollars. He was able to get reimbursement for this overcharge/payment and worked to ensure safeguards were put in place to prevent a repeat offense. Lieutenant Yant was instrumental in the inception of the department’s Fire Officer Training Program, implementation of the federally mandated Rapid Intervention Team (RIT) program, which ensured firefighter safety, as well as a number of IT related projects. He has extensive experience with finance projects to include rollout of a new payroll system overseeing the implementation of this cost saving project.

Throughout his 25 years of fire service experience Mark Yant has worked in administrative as well as emergency operations and brings a wealth of knowledge and expertise to both areas. His management skills, calm leadership, and exceptional organizational expertise will enable him to assist your company or organization, regardless of the problem.

During his 38-year career with Pepco Holdings Inc. (PHI), Tom Born has gained an extensive working knowledge of, and expertise in the electrical utility field.

Tom has held many operations related positions to include metering, dispatch, relay, telecommunications, substation, and emergency management.  Over and above these positions, Tom led the Atlantic City Electric (ACE) Incident Management Team from 2007 to 2011, served as Chief of Staff for PHI’s Incident Support Team, and headed the Operations branch of ACE staging areas. In these positions he coordinated the utilities response during many declared disaster events such as Hurricane Irene, the 2012 derecho storm, and Hurricane (superstorm) Sandy.

Tom participated in Conectiv Power Delivery’s integration of fiber and microwave systems and 800 MHz trunked radio systems joining together two separate telecom systems into a single utility owned radio dispatching system spanning four states. He has held numerous supervisory positions in dispatch, telecommunications, relay, and substation operations. Tom was the operational lead for staging areas, established to support restoration from Hurricanes Irene and Sandy as well as derecho storm (a highly destructive no notice weather event). In this role he managed more than 1000 electric line personnel and over 500 support personnel.

Throughout his career, Tom Born has been a leader and innovator creating a vision for utility company emergency response and recovery efforts. Tom brings to Brocato and Associates the expertise and energy to assist with training, exercises, operations support and incident management challenges.